The Newbridge chariot burial was always going to be a hard act to follow – but let’s talk forestry and upland survey because, in its own way, what we called the ‘forestry contract’ was to play a central role in the early success of the company.

The ‘forestry contract’ was a call-off contract with Historic Scotland – now Historic Environment Scotland –  to provide rapid pre-afforestation surveys in connection with applications under the then Woodland Grant Scheme. It was a 3-year rolling contract that the Headland founders had been working on since 1993, during their time at AOC (Scotland) Ltd. When it came up for renewal in 1996, it was always going to be a key target for our business plan. As luck would have it, it was the first contract that we won. It not only gave us a firm foundation on which we could start to build but it provided a wealth of upland survey experience that we would later be able to call upon in our consultancy work, particularly in connection with wind farm EIAs – which, in turn, would form a cornerstone of our expert witness services at planning inquiries. 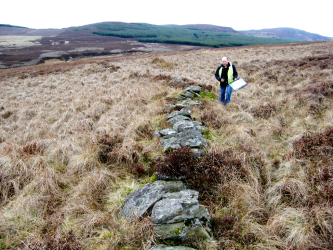 The largest of the woodland grant scheme applications were in the order of 700-800ha, the smallest as little as 4ha or 5ha. In all cases, however, it was critical that we were able to provide Historic Scotland with the necessary information on the cultural heritage resource of the area within what was a very demanding timetable.

This was a contract that took us the length and breadth of Scotland, and to almost every local authority area on mainland Scotland, as well as to the islands of North Uist, Lewis, Harris, Skye, Colonsay and Islay – as well as to the less well-known Tanera Mor (one of the Summer Isles) and Eilean Fladday (a tidal island off the northwest coast of Raasay, itself off the east coast of Skye).

The total area covered by the 79 surveys was just under 11,800 hectares (yes, nearly 118 square kilometres); we also quadrupled the number of previously known sites, adding just under 500 new entries to the NMRS and the various Historic Environment Records. Previously unrecorded hut circles and field systems were the key later prehistoric finds, whilst for the medieval or later period it was largely a story about upland transhumance and the old shieling grounds. 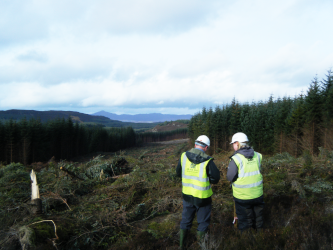 Perhaps not surprisingly, most of the projects (39%) were located in Highland, with the next highest counts coming from Perth & Kinross (17%) and Aberdeenshire (10%).  Many of the survey areas were extremely remote, accessible only after a long and often arduous climb, whilst for the survey of Eilean Fladday our working day was dictated by the vagaries of the tide.

Most of the work on the forestry contract was undertaken by the original ‘Headlanders’, Stephen Carter, Tim Holden, Chris Lowe and Magnar Dalland, with additional capacity provided in the early years by Jim Rideout and Chris Russel-White, and latterly by Colm Moloney, Louise Baker, Jonathan Wordsworth and Stuart Halliday. In all, over the period 1996 – 2002, the ‘forestry team’ undertook 79 upland site surveys.

In 21 instances, further marking-out surveys – to ensure that key assets were avoided by the planting schemes – were also carried out, bringing the total number of projects commissioned under the contract over the course of the final six years of Historic Scotland’s responsibility for heritage input to the Woodland Grant Scheme to a well-rounded and satisfyingly-complete 100.

With the ending of Historic Scotland’s involvement in the Woodland Grant Scheme in 2002, the contract came to an end. The foundations of the company’s upland survey and wind farm EIA capability, however, had been well and truly laid.