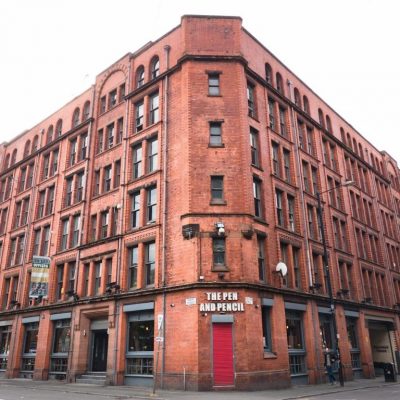 Headland North West is a part of the RSK Group Ltd office in Manchester, situated in Fourways House on Hilton Street. A former packing warehouse, Fourways House is a Grade II listed red brick building built in 1906 with minor 20th century alterations. It is an excellent example of a distinctive Manchester commercial building type which was designed by a Manchester architect, James William Beaumont. It now supports 26 businesses from a variety of industries.

Manchester is the sixth largest city in the UK with a population of over 545,500 as of 2017. It is fringed by the Cheshire Plain to the south and the Pennines to the north and east. It is well connected by road and rail to other northern hubs like Leeds, Liverpool and York, as well as Birmingham and London to the south.

The office is located in Manchester’s Northern Quarter, an historic warehousing district, now hipsters paradise. Home to many eateries catering to all needs and tastes, boutique shops and the legendary Afflecks Palace. Manchester is also the birthplace of the vegetarian movement, and it’s the best shout for vegetarians and vegans outside London.

Like all major cities the traffic can get quite congested and it is best to try and avoid driving the city centre, this is made easier by the public transport system. Within the city centre the free bus provides a ‘hop on hop off’ service linking the main rail stations, shopping districts and business areas while commercial bus services provide links across Greater Manchester. The Metrolink tram network is one of the best in the UK with frequent services and an easy to use ticket system. The city is also bike-friendly with marked cycle lanes and dedicated routes; if you prefer walking the city centre can be navigated within 20 minutes.

The North West office is within easy walking distance of Manchester Piccadilly Station.

Manchester is a city that lives and breathes football with two Premier League Football teams – Manchester United and Manchester City. It has hosted numerous domestic, continental and international sports competitions in football, swimming, rugby and more.

The Manchester music scene is world renowned, producing famous bands such as The Smiths, Oasis, Take That, Joy Division and more. It is also a popular stop for touring music artists. It has a thriving theatre, opera and dance scene and several museums that celebrate the city’s Roman history and rich industrial heritage. The arts scene can’t be understated. Manchester is the centre for arts in the Northwest and west midlands.

Manchester is well known for being LGBTQ+ friendly, with the Gay Village area not far from the office.

Housing prices are cheaper than London but are typically higher than most other cities in the UK. The prices also vary depending on the area in the city, student flats and shares are also available for those on a smaller budget.

The excellent transport system and reasonable parking just outside the centre means that it can be very cost effective to live in the Greater Manchester area. Stockport, Ashton, Rochdale, Oldham and Bury are good alternatives for outside the city proper.

There are three major universities, with a large amount of cheap-to-rent housing in Salford, Hulme, Rusholme, Longsight and Fallowfield. All with excellent transport links and amenities. Many of these areas attract large numbers of young professionals as well as students, so it’s not all 4am parties.

Manchester is about an hours’ drive to the Peak District National Park and is around a two and a half hour train journey to London. Manchester Airport is the third busiest airport in the UK and flights depart to destinations across Europe, North America, the Caribbean, the Middle East and Asia.

The beach at Southport is an hours’ drive.