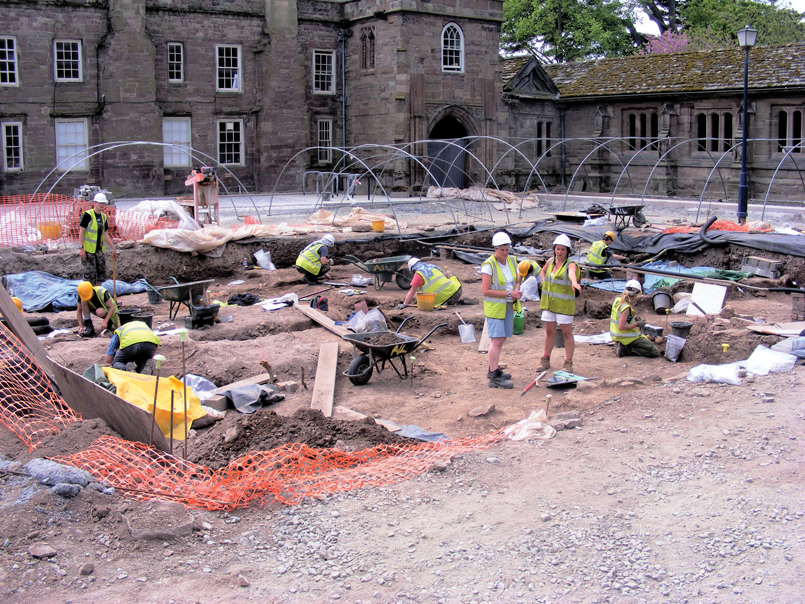 14 May A Close Encounter with Hereford’s Former Residents

Andy Boucher of Headland Archaeology presents an illustrated lecture on the recent excavations in Cathedral Close.

The Cathedral Close project was funded by the Heritage Lottery Fund and commissioned through the Cathedral. It was undertaken between September 2009 and May 2011 has provided one of the best opportunities to gain a better picture of life and death in Hereford over the last 1000 years. Archaeologists from Headland Archaeology have uncovered some interesting clues from both the human remains within the close and objects buried with them.

Between the 14th and 18th century Hereford had a thriving textile industry which involved working in fulling (wool) mills, linen weaving, the making of caps and hats as well as the manufacture of leather gloves. From the skeletons a picture is beginning to emerge about the intensity and conditions of this type of work. There seem to be a lot of young and middle aged women with osteoarthritis in their wrists and thumbs. Although this is quite a common joint disease, the fact that it occurs in one part of the body is usually taken to indicate that some form of repetitive or stressful occupation is being undertaken by those individuals. In this case weaving could be responsible for the symptoms observed and shows that this type of work was being undertaken by girls from a very young age.

There is also evidence for a big social divide in the medieval and later population, measured on the basis of the richness of their diet. Many individuals exhibit signs of malnutrition, which shows up in the teeth. On the other hand a number of the men buried in some of the more prestigious graves, either expensive lined coffins, or stone lined vaults/cists. But what was the price paid for this? How did the past population view death, where did they come from and why? These and many more questions will be answered in the talk.

The lecture has been organised by the Hereford Civic Society and will be held in the Woolhope Room in the Hereford Library, Wednesday 15th May from 7.00 pm.