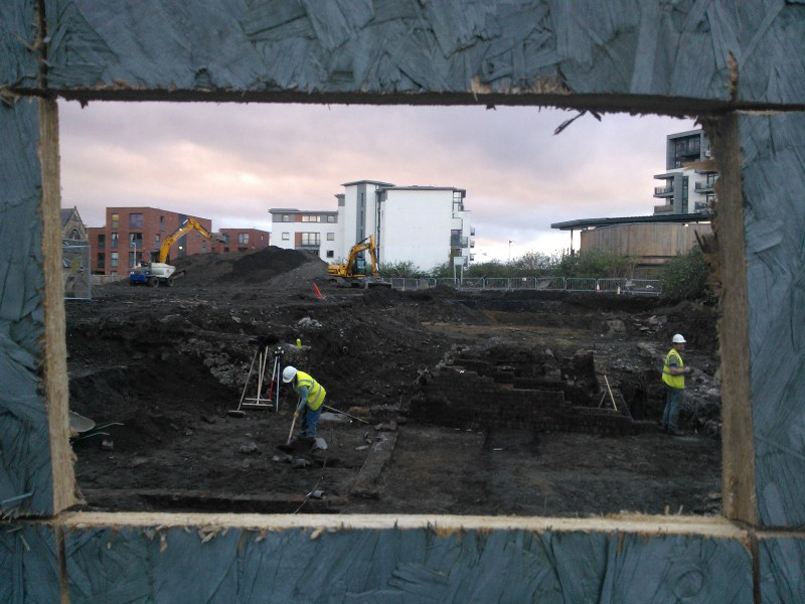 Headland on behalf of our client Watkin Jones Group is pleased to invite the general public to join the archaeological team on site at West Tollcross, Fountainbridge, Edinburgh where current excavations are taking place revealing several 19th century industrial buildings. The site will be open for visitors on Sunday 18 November from 12 to 3 pm.

The site of the proposed development is located at 19 West Tollcross, just off Lochrin Place, in Fountainbridge. The archaeological dig is taking place in advance of redevelopment of the site for student accommodation by Watkin Jones. The site is located within the area of Fountainbridge which was a hub of industrial activity in the 18th–19th century. At that time, the area was dominated by breweries and distilleries. Beer grew in popularity, more so than wine or brandy following the Union of 1707 when the ‘Auld Alliance’ with France was severed. Brewers were attracted to the Fountainbridge/ Tollcross area due to the water supply. Large quantities of pure water trapped within a geological fault underlie the district.

The archaeological excavations are ongoing but have already revealed several walls and surfaces belonging to different industries in the area; from a Slaughter House and Foundry to Lochrin Distillery and possible other smaller industries.

The team will be there on Sunday 18 November to guide visitors to the archaeological remains and show some of our findings.