The Newbridge Chariot Burial: A Winter’s tale of an unexpected and unique discovery

31 May The Newbridge Chariot Burial: A Winter’s tale of an unexpected and unique discovery

Picture the scene: a cold Winter’s day, a biting north-easterly wind with occasional snow flurries.  It’s early afternoon on Thursday 25th January 2001. The team has been on site now for just over two weeks, monitoring topsoil stripping on behalf of Muir Construction for an extension to the industrial estate at Newbridge, out by Edinburgh airport. It’s been fairly unspectacular so far: a scatter of truncated pits and post-holes, a few small ring ditches, very little datable material …… but things are about to change.

Alan Hunter Blair – known to one and all simply as Blair – has been investigating an isolated and unusual-looking ‘figure-of-eight’-shaped pit. There are traces of what look like iron bars in the large pit that makes up the north end of the feature, and a number of small iron rings in the smaller pit that forms the southern part of the mis-shapen ‘figure-of-eight’-shaped pit. That Eureka moment is about to arrive, he calls the office to talk it over with Stephen Carter, the Project Manager:

Stephen, probably best to sit down but I think we’ve got an Iron Age chariot burial…

And indeed we had, as Dr John Dent – then Principal Archaeologist at Scottish Borders Council and one of the few archaeologists in Britain to have excavated Iron Age cart burials – was able to confirm the very next day.  The first in Scotland and clearly very different from the dis-assembled examples known from Wetwang and elsewhere in Yorkshire.

The resulting excavation was a joint operation involving staff from Headland and the National Museums Scotland, who provided conservation and photographic services on site, as well as the excavation and post-ex services of Iron Age specialist, Dr Fraser Hunter. The results were published in the Proceedings of the Prehistoric Society in 2010. 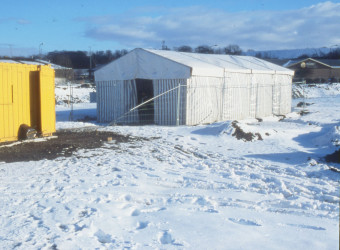 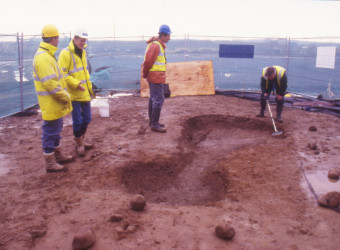 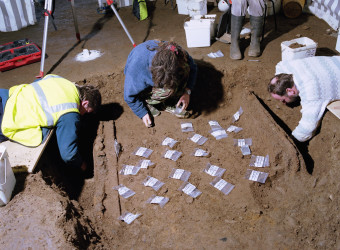 Detailed post-excavation analysis has revealed a history of repair and reuse, and construction techniques that indicate links with the chariot building traditions of both Yorkshire and Continental Europe.  Interestingly, the chariot would have had a slight ‘limp’, given that its non-matching wheels were of slightly different diameters (860mm and 900mm).

We now have a vivid picture of the Newbridge vehicle. It was buried intact, with a gauge of 1.35 m between the wheels, a pole roughly 3.15-3.45 m long and a yoke around a metre long. It was harnessed by four simple iron terrets, lashed to the yoke by leather straps which slotted through vertical holes. The inner terrets may have had organic decorations tied to them. The outer left terret had broken and been replaced by another, slightly larger one, lashed round the yoke, perhaps because the slot was blocked with the original rawhide. The reins were still threaded through the right pair of terrets when the vehicle was buried, but not the left ones. Other leatherwork traces on the terrets come from the mass of harness straps lying in the grave. The reins and bridle were still attached to the two bridle bits, wrapped round the rings of the bits. The bits were not a matching pair; the left bit is more complex in the way its links are fixed to the ring. Both were plain two-link bits, with leather dangles in the centre for the horse to chew on. 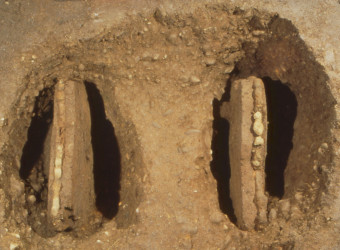 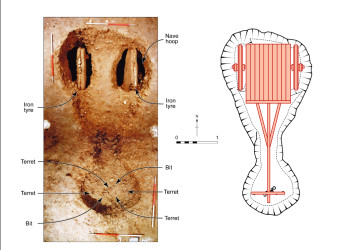 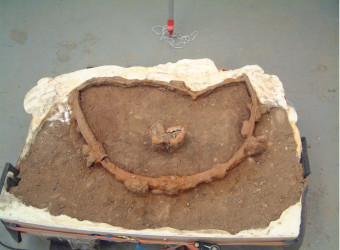 Fifth century BC radiocarbon dates for the burial – from small quantities of ash wood preserved at the lowest point of each wheel – place it firmly within La Tène A, consistent with its similarities to European examples and indicating that it predates the known Yorkshire examples. This indicates the emergence of a British tradition of chariot construction by this time, familiar with Continental habits and technology but distinctively different in such areas as wheel construction and suspension fittings.

Newbridge gives us our oldest evidence of chariots in Britain, our first chariot burial outside Yorkshire and the first sight of a tradition both drawing on and developing independently from Continental parallels. 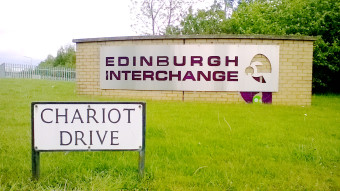 For more detail, check out the publication paper – ‘A 5th century BC Iron Age chariot burial from Newbridge, Edinburgh’ by Stephen Carter, Fraser Hunter and Andrea Smith.  Proceedings of the Prehistoric Society 76 (2010), 31-74.

Meanwhile, the reconstructed Newbridge chariot occupied a place of pride in the National Museum of Scotland’s Celts Exhibition in 2016. The site of the discovery has also been commemorated with the street name ‘Chariot Drive’.