Stabbed in the Back: Rare Pre-Norman Burials found at Hereford Cathedral 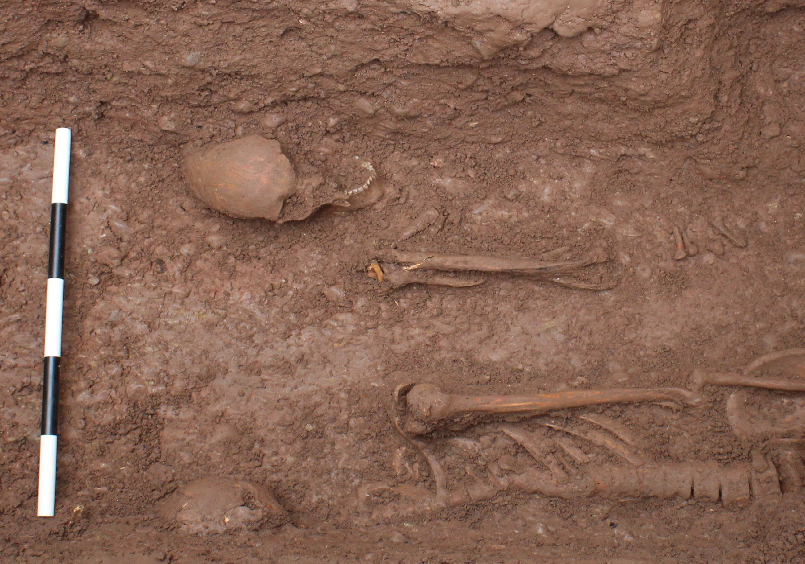 10 Nov Stabbed in the Back: Rare Pre-Norman Burials found at Hereford Cathedral

In late 2016/early 2017 Headland Archaeology’s Midlands and West office undertook archaeological work in connection with improvements to buildings and facilities in the College Cloisters beside Hereford Cathedral. During the excavation the remains of three skeletons were discovered and have been radiocarbon dated to the 7th and 8th centuries, prior to the Norman Conquest of England. This is a particularly exciting discovery as out of the thousands of burials (2456 to be exact) excavated around the cathedral only one other has been securely dated to the same period. The skeletons were found at a depth of nearly two metres within an area formerly occupied by the 15th century Custos Lodge.

Post-excavation analysis of the skeletons revealed that there was one male, one female, and one juvenile. The male, who was between 35-46 years old when he died, had suffered at least four, possibly five, blade injuries, two of which would have been fatal in their own right. Only one of the injuries, a possible cut above the left elbow, shows traces of healing, indicating that the other injuries were inflicted around the time of death. Two of these injuries could have been ‘killing blows’.

The most minor of the blade wounds was a small cut across the right thumb. More serious is a stab wound to the left ribs, between the 8th and 9th ribs. While he could have potentially survived this it would have resulted in a punctured lung, spleen, or stomach. 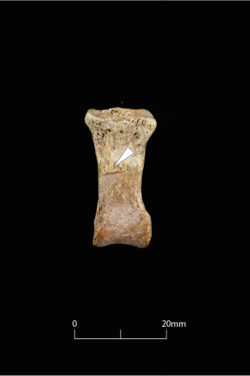 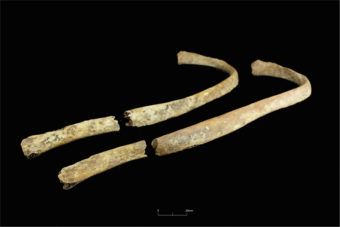 The first potentially fatal blow was a literal stab in the back, inflicted with a very sharp, narrow blade. It cut through the left shoulder blade first before severing the middle of the spine at the 7th and 8th vertebrae. You can see where the tip of the blade struck the 9th vertebra. This injury would almost certainly have been fatal, and at the very least would have caused paralysed legs had the victim survived. 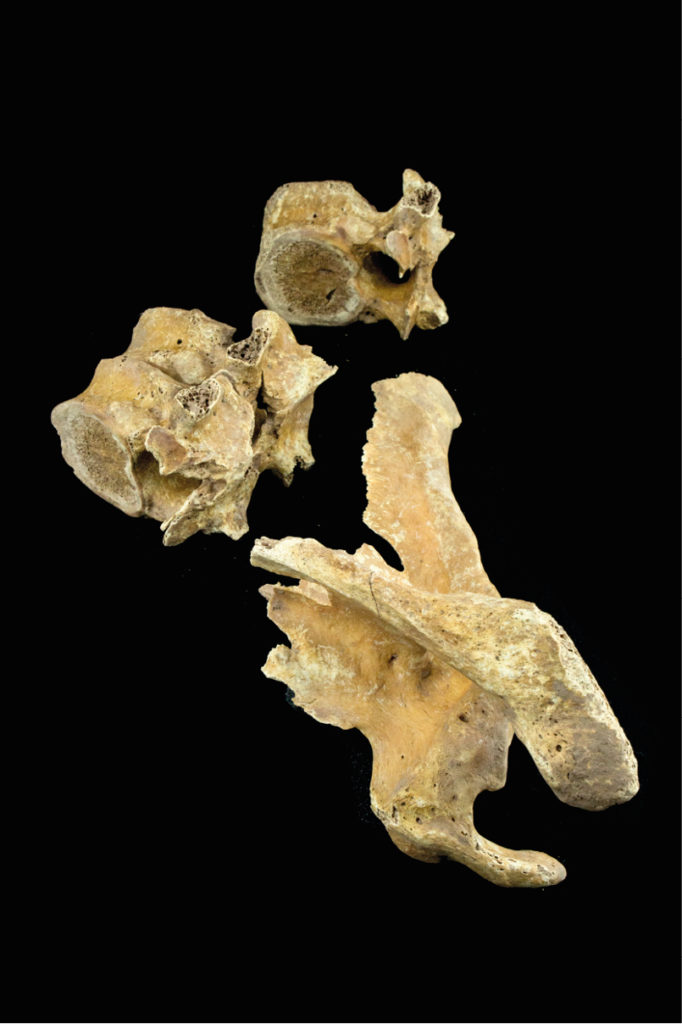 The second and final fatal injury was a very powerful blow to the head from behind with an edged weapon (like a sword or axe). The blade cut through the skull into the brain and would have been almost immediately fatal. The sheer force of the blow was so strong it broke the back of his head and deformed the skull around the point of impact. 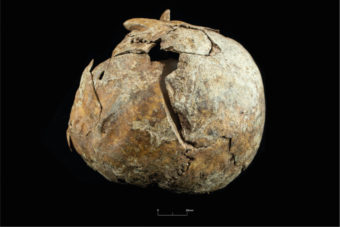 Cut wound at the back of the skull

Radiocarbon dating of the skeleton’s right kneecap revealed that this man lived between 680-780 AD; placing him at a key point in the history of Hereford’s development. Historical sources record that at the beginning of the 8th century the Welsh were troubling the English with their attacks. In 743 the kings of Mercia and Wessex campaigned together against the Welsh, and reference is made to the frequent violent skirmishes which took place between the two forces during the period. Although little detail of the event is known, several Welsh sources record a battle of Hereford taking place in AD760. Given the violent death of this man it could be speculated that he was involved in these battles. Given that he has a potentially healed injury to his elbow it is also a possibility that it wasn’t his first time on the battlefield, although it was certainly his last.

“This is an incredibly important burial in the history of our city. It takes us back to the origins of Hereford, before Offa’s dyke had been constructed and when it was a vulnerable settlement on the frontier between Mercia and the Welsh. This individual suffered an incredibly violent end, more than likely in battle.”

The Dean of Hereford, The Very Reverend Michael Tavinor, said:

“We have long suspected that the earliest cathedral in Hereford was located in the vicinity of College Cloisters – with this burial we now have another key piece of evidence to indicate that this is indeed the case”.