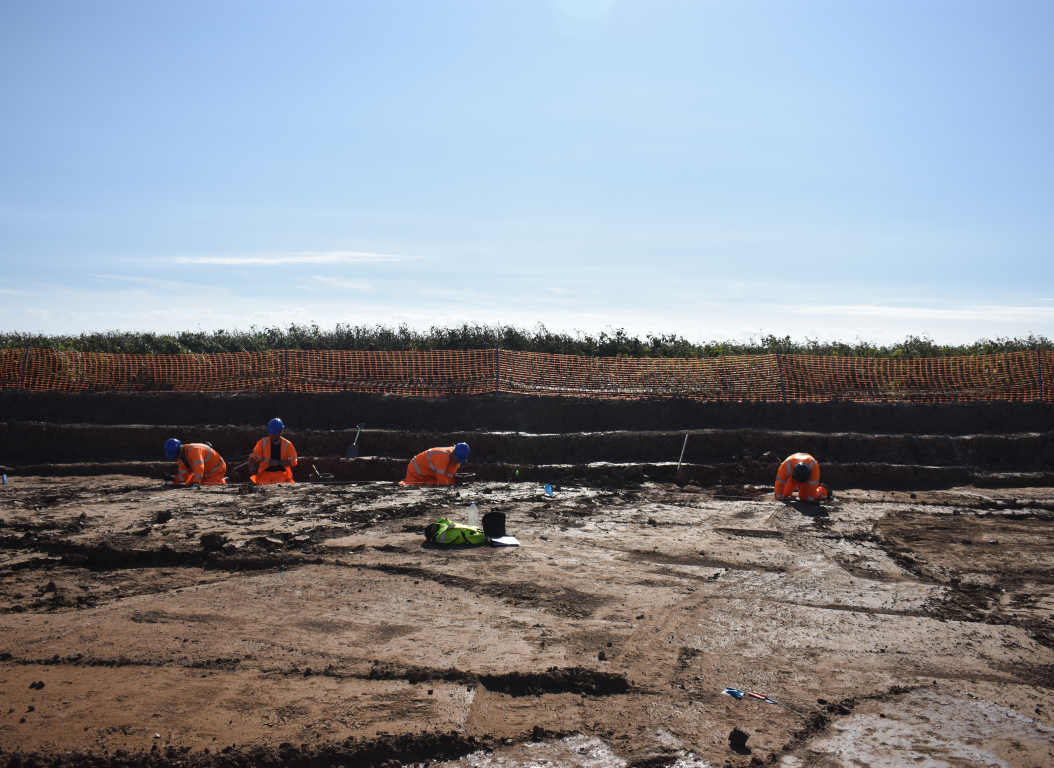 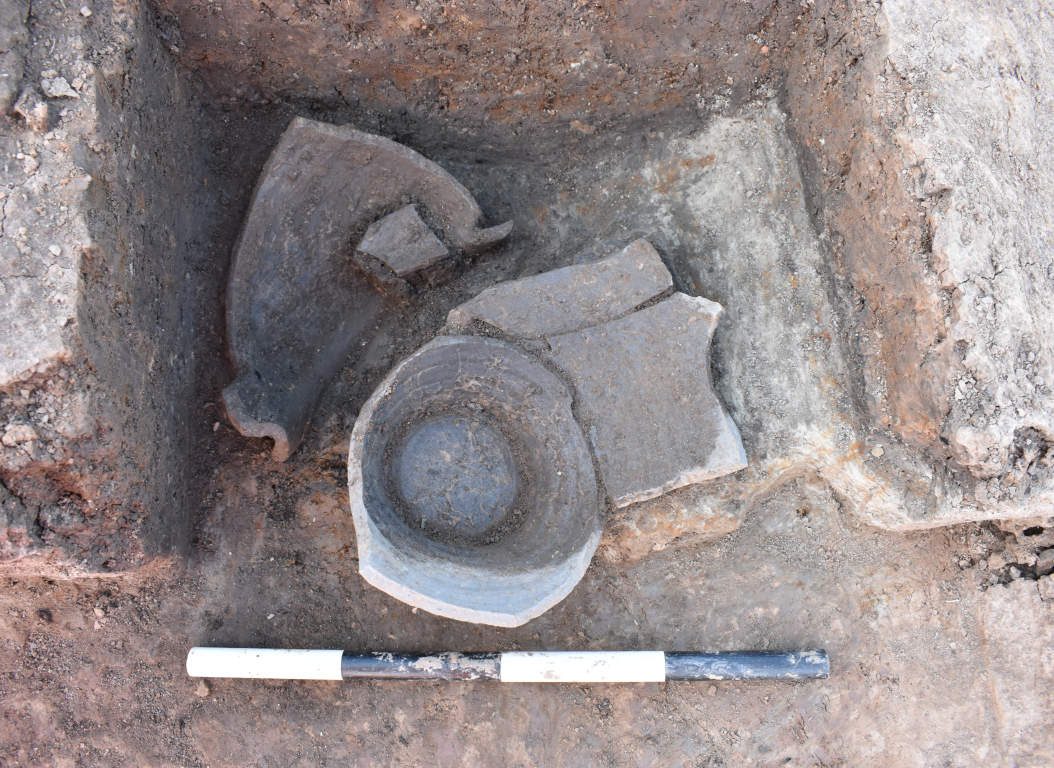 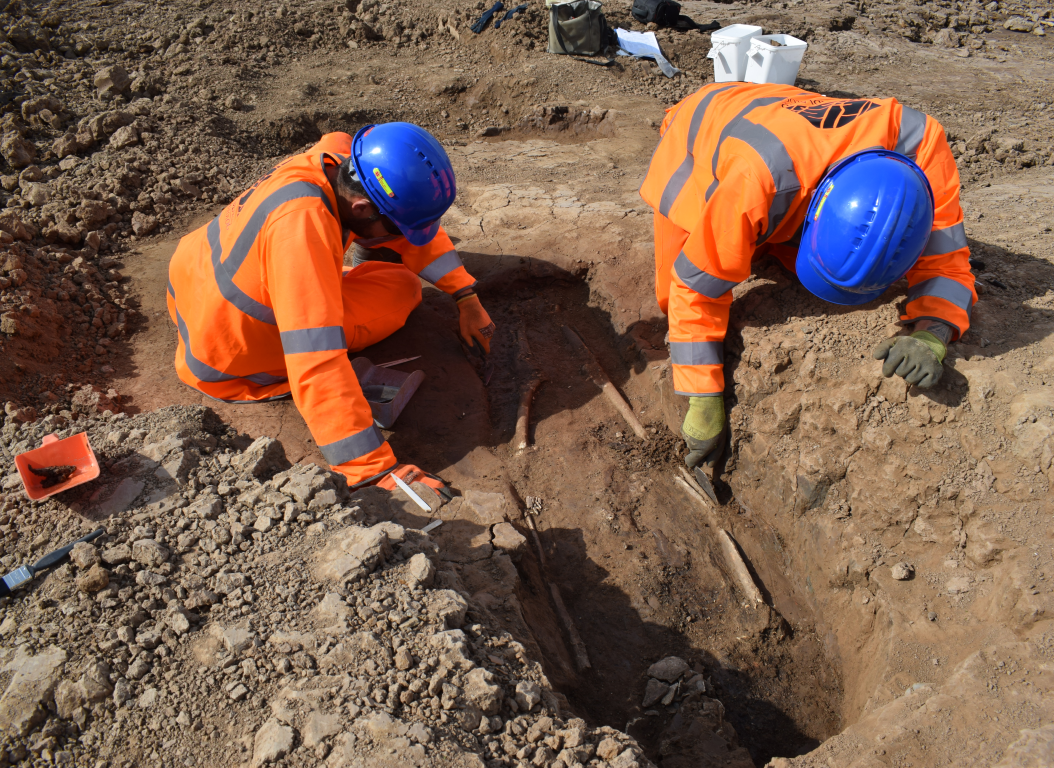 Headland has provided multiple stages of archaeological mitigation work for this project over the years, requiring a well-organised team working on several sites along the cable system; subsequently revealing a complex story of landscape use, change and modification throughout the history of coastal Lincolnshire.

The Triton Knoll Electrical System (TKES) runs for approximately 60km, making landfall at Anderby Creek on the East Lincolnshire Coast before extending in a south-westerly direction to Bicker in the Borough of Boston. The onshore cable system required the excavation of a corridor, 30–35m in width, to install two high voltage cable circuits approximately 1.5m below ground. Headland was contracted by the principal cable contractor, JMS, to conduct archaeological investigation, monitoring and recording at specific locations along the route, in advance of construction and during the initial soil stripping. Subsequently Headland conducted archaeological mitigation excavation work on 24 areas along the route in accordance with a Written Scheme of Investigation. The areas were excavated either as Strip, Map and Record (SMR) or as Set Piece Excavations (SPE) to target features identified during the evaluation phase.

The archaeological remains revealed that the current farmland was once rich coastal marshland with significant evidence for prehistoric and Roman activity, particularly salt production. Along the route several salt production sites, known as salterns, were uncovered dating from the Iron Age through to  the Roman period. Salt was made by utilising the process of evaporation, where seawater was turned into salt crystals. We uncovered similar thick spreads of burnt material from numerous sites along the route. These are the spreads of waste material from salt production and contain fragments of ceramic salt-making equipment known as briquetage, including containers for holding seawater and the pedestals used to prop them over a fire.

Some of these sites also contained evidence for settlement and subsistence; ephemeral structures, cooking ovens and field boundaries. Artefactual and environmental analysis during the post-excavation assessment process has identified a number of exciting discoveries. Plant remains preserved within a cooking pit included coriander seeds, a plant which was introduced to Britain during the Roman period. Another exciting feature was an oven containing a complete jar; its contents are currently being analysed in our lab. The Roman pottery assemblage recovered across the route was a mix of local and imported wares including high-end samian, utilitarian greyware and burnished greyware.

Three burials were also discovered at one of the Roman settlement sites, dated by radiocarbon to the second to third century AD. After careful analysis in the lab, we were able to determine that these were the remains of a female young adult, an adult and a sub-adult. The young female was particularly interesting as she was buried in a wooden coffin, a possible symbol of status in the second century AD. The burial also contained 24 hobnails, short nails with thick heads that were used to increase the durability of the soles of footwear, indicating she was buried wearing her shoes.

The excavations revealed evidence for post-Roman activity including Saxon and later medieval field systems. Medieval and post-medieval improvement of the landscape was also evident with the drainage of the fenland for agriculture seen across the excavated sites in the form of networks of drainage ditches and boundaries.

This project revealed a complex story of landscape use, change and modification throughout Lincolnshire. The mitigation works have been successfully completed and the post-excavation phase is now ongoing with the results of the excavations and specialist analysis being prepared for final assessment report delivery. Headland has also participated in and created resources for community events across the route organised to inform the public on the results of the archaeological works.