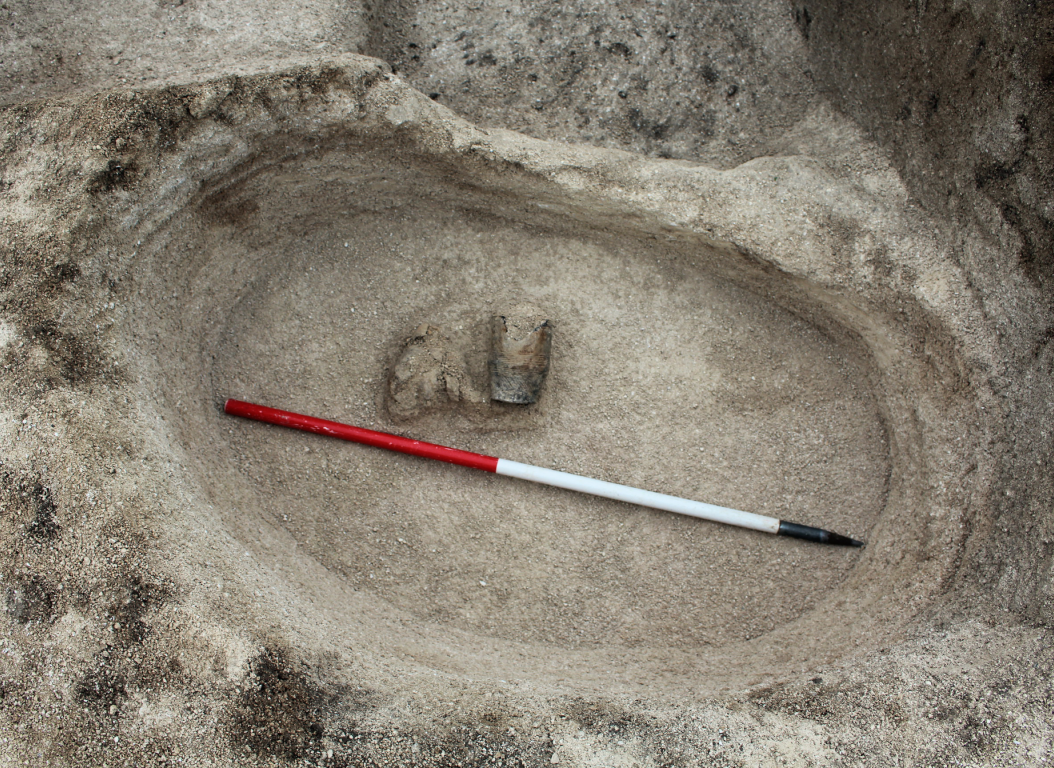 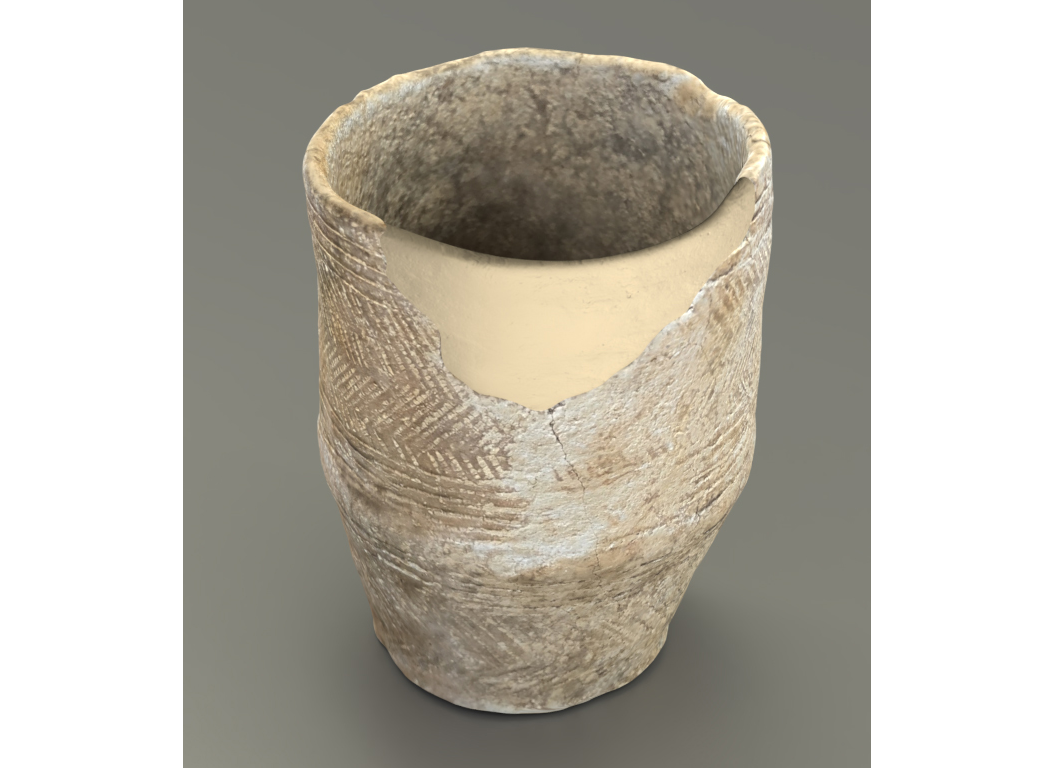 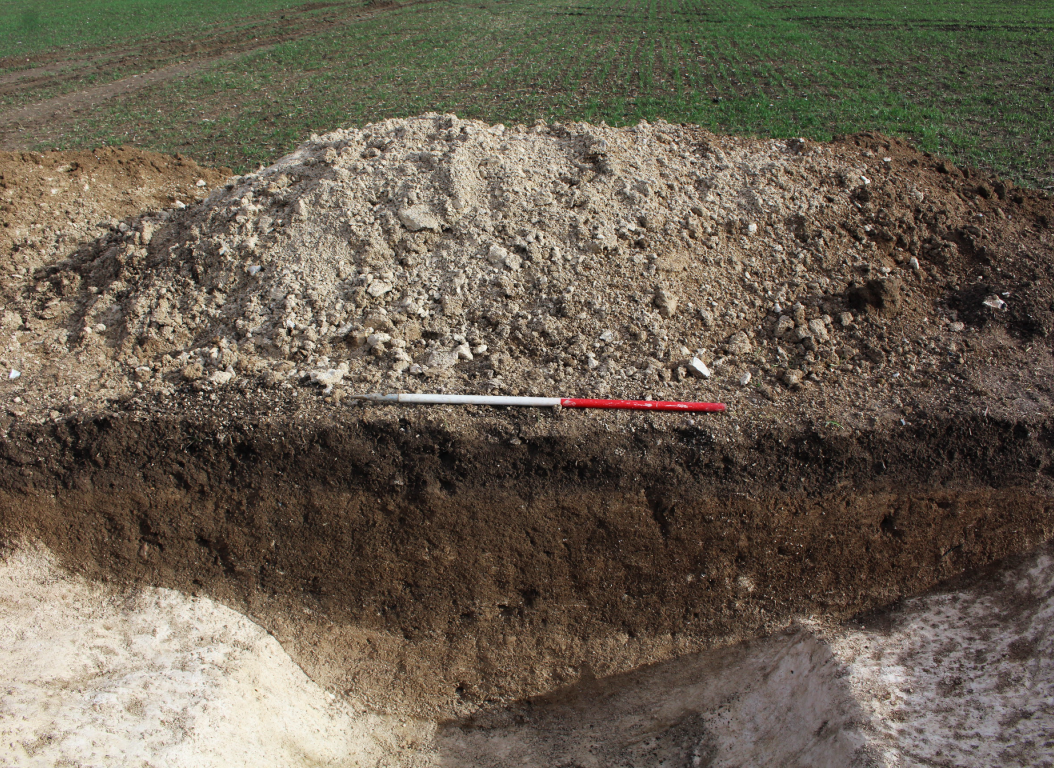 Carrying on from previous geophysical work, archaeological evaluations uncovered extensive prehistoric remains including potential barrows, an Iron Age enclosure and an infant burial with a nearly complete Beaker dating to approximately 2500-1700 BC.

In 2018-19 Headland carried out an archaeological evaluation and watching brief following our geophysical survey of land to the north and south of Netherhampton Road, Salisbury, which had identified potential archaeological remains. This work was commissioned in order to inform a planning proposal for residential and commercial development of the site.

The evaluation, consisting of 137 trenches, broadly corroborated the results of the geophysical survey; extensive archaeological remains dating from the earlier Bronze Age to the post-medieval periods were found and recorded. A watching brief of geotechnical testing pits uncovered minimal to no archaeological remains.

A total of 24 trenches were investigated on the land to the north of the road, targeting previous geophysical anomalies. The evaluation revealed evidence of former barrow ditches dating to the Bronze Age and indications of Beaker period activity, possibly funerary, within the vicinity. The remains of ring-ditches, agricultural features and discrete features were all identified. Evidence for limited or peripheral later prehistoric occupation and use of land was also recorded with the primary focus being funerary related.

The presence of Beaker pottery within a linear feature is also of particular interest and represented the earliest positively attested artefactual evidence on the site, dating from the late Neolithic to early Bronze Age. The remaining pottery assemblage suggests late Bronze Age activity on the site.

Medieval agriculture, in the form of ridge and furrow, was present and likely to have substantially contributed to truncation of agricultural remains on the site, together with more recent agriculture.

A further 113 trenches were investigated on the land to the south of the road, a representative sample of 2% of the site. The most extensive and significant archaeological remains were found here.

The early Bronze Age remains consist of an infant burial and a potential ring-ditch which may be the remains of a barrow. Osteological analysis of the bones indicates the infant was around nine months old when it died. The burial included a near-complete Beaker vessel allowing us to date the grave to the Beaker period (2500-1700 BC).

The Bronze Age period was chiefly represented by twelve ring-ditches, demarcating more potential barrows, though, with the exception of earlier Beaker remains, no associated burials were identified. A single human humerus and other disarticulated human remains recovered from plough-soil suggests that former burials associated with the ring-ditches may be ploughed-out or heavily truncated, but they may also lie outside the trenches.

The Iron Age was represented by a sub-circular enclosure, defined by a large ditch, the interior of which contained complex phases of intercutting pits and the partially exposed remains of a possible roundhouse. The features and associated artefacts appeared to indicate domestic occupation. Suggestions of potential former structural remains were identified; including daub containing wattle impressions, potentially from wattle and daub walls. One of the deposits also contained barley and wheat seeds. A large pit cut into chalk bedrock was found to contain two horse skulls that seem to have been deliberately placed with some care and attention; cut marks on the skulls suggesting the removal of hides, butchery or both. Somewhat surprising was the recovery of an infant skeleton during environmental sample processing of deposits from the enclosure ditch. Unfortunately, no evidence of a grave was identified during excavation. The presence of this skeleton raises questions regarding mortuary practices, rites of passage and the position within societal structure of a new-born or potentially still-born child. Infant burials within enclosure ditches are not unknown, with examples found at sites in the south-west of England. Further work on the enclosure and site may shed light on such a question.

The client is now progressing the site through the planning process, with the results of the archaeological work to date used to determine whether mitigation is required in advance, or during construction.