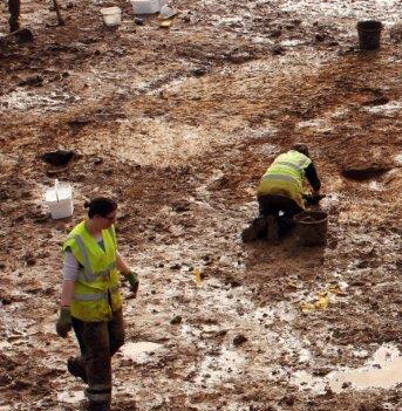 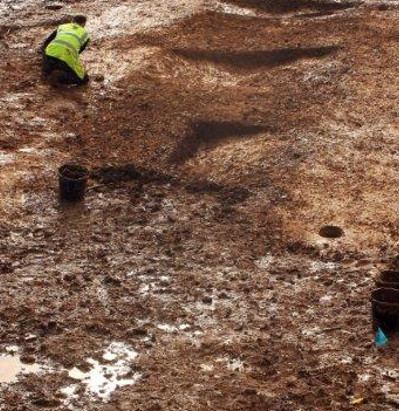 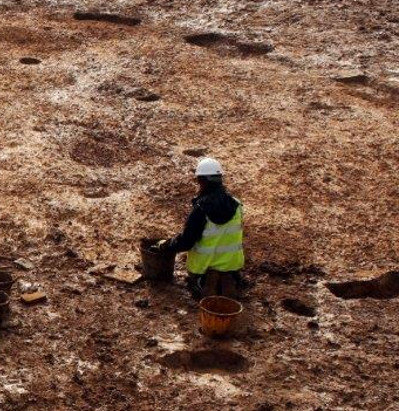 A programme of archaeological mitigation was urgently needed by a consortium of housing developers in order to ensure that their development schedule remained on track. Their archaeological Consultant had agreed a scope of works with the local authority archaeological advisor and we were contracted to complete that within a challenging timescale. The development site is located close to Rugby and lies in a landscape of relatively well understood archaeological remains, dating largely to the late Iron Age – Roman periods. The site had already been evaluated and remains of these periods were  expected.

Previous evaluation had identified two late Iron Age enclosures, some broadly contemporary field boundary ditches and isolated prehistoric or early Saxon features. Similar remains were likely to be recorded in the mitigation works. The fieldwork was commissioned in late January and all works had to be completed prior to the end of February 2015.

Our contracting staff expertly identified the risk to timescale posed by major utilities close to and within the scheme. They procured plant in a timely way and arranged access, in liaison with the client and the archaeological consultant, with tact and respect in order to ensure that works could commence. The main constraint on timescale was the seasonal sensitivity of Great Crested Newts and this represented a non-negotiable deadline for the completion of all major groundworks. Working back from this deadline required 2.2ha of land to be stripped and nine excavation areas to be opened. The works were successfully completed and signed off by the archaeological consultant and local authority archaeological officer within the agreed timescale.

Investigation recorded a late Iron Age round-house. The form of the building consisted of an exterior drainage ditch, surrounded by an interior ring of post-holes, and some evidence of internal erosion.  Samples for AMS dating were recovered from charcoal in the external ditch, and from the post-pipes of the internal post-ring.

Pits associated with possible Saxon mortuary practice were excavated and recorded, and small traces of burnt bone and charcoal were also recovered. Those features excavated during the evaluation were re-excavated to confirm their depth in relation to surrounding features. The results of these works have been assessed and a proposal for their publication is now under consideration by the clients’ archaeological consultant.