Scotland’s Oldest Basements; Details on the Souterrain at Dubton Farm 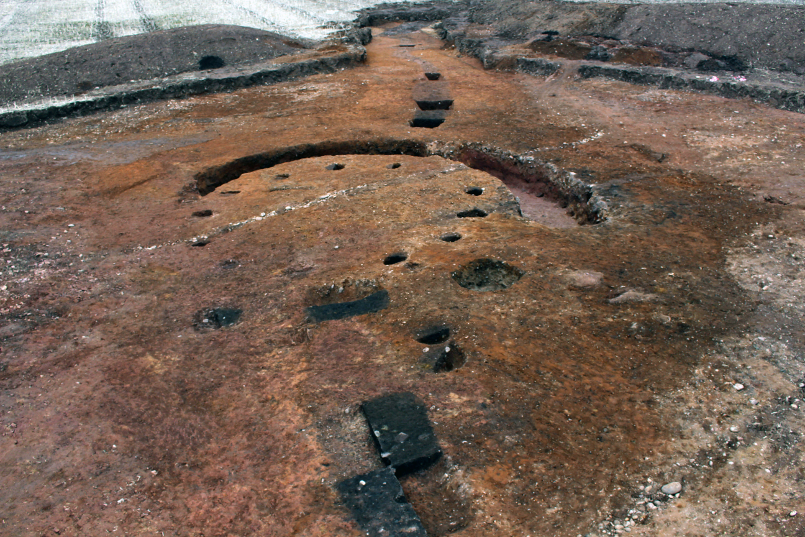 In February 2016 our archaeologists excavated a site, located on a small plateau overlooking the river Esk, near Brechin, Angus before the land was to be developed. As the site was excavated we began to reveal two roundhouses and a souterrain, a type of small cellar store, which radiocarbon dating revealed to date between the 1st and 3rd Centuries AD.

The first roundhouse had a single inner ring of posts 6.2m in diameter with the entrance facing the sunrise to the east, and a second post-built roundhouse to the north-east, and was similar in size and design to the first.

To the north-west outside the first house was a curved ditch that was deeply cut with a flat base. It has been concluded that this is from the same date with the roundhouse and is most likely to be what is known as a ‘souterrain’. This is a term, originally from the French sous terrain meaning ‘under ground’, used to describe a specific type of underground structure used for storage, mostly in the Iron Age. They could be considered to be very early versions of basements or cellars and are thought to have functioned primarily as storage for food materials that would benefit from cold, dark and dry conditions, a primitive refrigerator so to speak. This was not entirely unexpected since the site itself is located in the middle of one of the largest concentrations of souterrains in Britain.

However this souterrain is particularly important. It had two main chambers which have been called the north-east and south-west  and was 15m long in a C-shape. The entrance was located at the south-western end. A long ditch ran to the middle of the souterrain, on a north-west south-east alignment and, interestingly, a tunnel linked this ditch to the south-west chamber. It sloped downwards into the south-west chamber and the edges had traces of iron panning; which indicates that water ran through it for a long time. A stone ‘plug’ which fit tightly into the tunnel opening was found opposite the tunnel entrance. This could mean that the tunnel was part of a water collection system feeding water into the south-west chamber, meaning it was probably a something similar to a water tank, a very rare find. Another unique feature of this souterrain is that it is the first one that has been excavated which exists entirely within a roundhouse, they are usually located in close proximity to the houses but rarely inside them. Additionally, the soil into which the souterrain was dug was soft sand that would have been impossible to maintain without a lining, the remains of stake holes along the edge of the north-east chamber and the lack of stones means that the walls would have been wood-lined which seems to have been a fairly common tradition.

In terms of finds this site did not have many, the few pottery sherds that were found are typical of the local type from this period. The finds associated with the first roundhouse suggest a domestic use. The most significant find was an amber bead in two pieces.

This excavation yielded a significant amount of evidence about the settlement of Brechin and Angus in the early part of the first millennium AD. If you are interested in learning more about this site and our excavation the results have been published in the Tayside and Fife Archaeological Journal.