How many roads must an archaeologist walk down before we can say that the archaeological potential of the site has been adequately characterised?  And how many turbines does it take to ensure that the renewables target will be met by 2020? Whilst the answers to these questions may be blowin’ in the wind, there is no denying the fact that wind farm development in Scotland has made a major contribution to the UK target on renewables. It has also been a key part of Headland’s own story over the past 15 years or so. 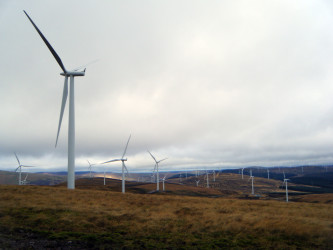 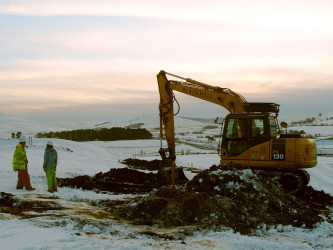 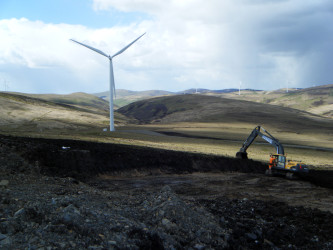 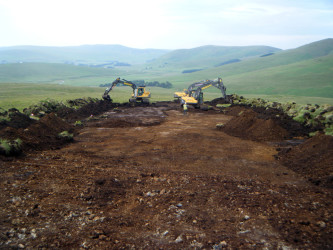 Clyde Wind Farm is renewable energy on an epic scale. Officially opened on 14th September 2012 by Scotland’s then First Minister, Alex Salmond, it is one of the largest consented on-shore wind farms in Europe. Straddling the A74(M), the western gateway into central Scotland, the site is a familiar landmark to travellers by road, rail and air. Everything about the site is big: including the recently constructed extension, it extends across an area of over 50km2, with 206 turbines and an installed generating capacity of 512mW.  Joining up the turbines are some 105km of access tracks and around 150km of cable trenches; not forgetting the two substations, an operations building and various compounds. So, how many archaeologists does it take to build something on this scale?

Not surprisingly, it’s not easy to say since the project has included elements of consultancy, multiple stages of field evaluation and mitigation-phase excavation, as well as survey, post-excavation assessment and analysis by a wide range of specialists and, ultimately, reporting, with publication to come. What we can say, however, is that the project, including the recently consented extension, involved 84 members of staff for a total period amassed of some 5,000 person-days. Of the 84 who have worked on Clyde over the years, just under half are still in the company, including the consultants who worked on the original Environmental Impact Assessment, Dr Stephen Carter and Paul Masser.  Having this sort of continuity in the Project Team is one of the reasons that we have been able to service the contract so efficiently and effectively over the course of its design and build, having ready access in-house to a depth of knowledge about the project and its archaeology. 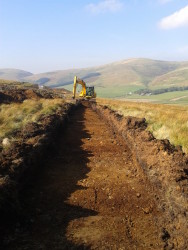 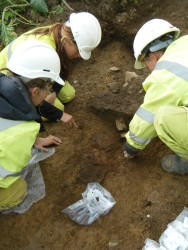 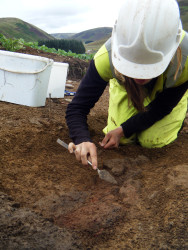 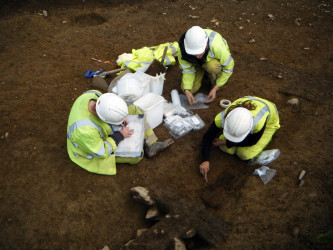 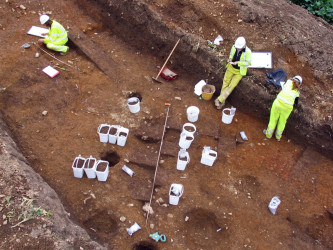 Like all major infrastructure projects, it started (2003) with an EIA.  Like many it was refused, like some it was then overturned at appeal (2006). With the original study area containing some 235 known archaeological sites – ranging from henges, hillforts and cairns, to Roman camps and fortlets, to medieval bastle houses and fragments of post-medieval rural settlement – it was clear that cultural heritage would be a key topic to be addressed in the design of the wind farm. Understanding how setting contributes to the significance of the various assets was of paramount importance. Dr Carter’s evidence at the appeal, concerning the settings of designated assets in the area, was a critical turning point, not only in the context of gaining consent for Clyde Wind Farm itself but also in the wider field of cultural resource management. For the first time we had a clearly-defined, explicit and reproducible methodology for the study and analysis of setting that was distinct from and independent of criteria employed by consultants working in landscape and visual assessment.

With the wind farm consented, internal management of the project passed from the consultancy team to the contracting side of the business.

Site investigations began in 2007 with monitoring of geotechnical test-pits throughout the consented layout. The results of the test-pitting, along with walkover surveys to identify new sites within areas of tree felling, were integrated within the archaeological constraints map for the development. Managing the impacts on the archaeological resource over such a large area presented a real challenge, which we  resolved by developing a series of zoned risk or ‘trigger’ maps for the entire wind farm, which quickly and easily indicated what level of archaeological response was required in any given location. Equally key to the success of the construction phase of the project was the creation of a team of Archaeological Clerks of Works (ACoW). The ACoW formed part of the Environmental and Ecological Protection Group (EEPG), so that any archaeology issues could be addressed on an equal footing along with those concerning peat, ecology, water and drainage.

Construction on the original consented scheme started in 2009, with Headland providing archaeological support throughout the 4-year construction programme. Post-excavation analysis on a number of key excavations is still in progress but the excavation at Whelphill of a substantial part of a later prehistoric unenclosed platform settlement will almost certainly form a new benchmark study of this ubiquitous feature of the local landscape for years to come.